The WordPress.com stats helper monkeys prepared a 2015 annual report for this blog. Here’s an excerpt: A San Francisco cable car holds 60 people. This blog was viewed about 210 times in 2015. If it were a cable car, it would take about 4 trips to carry that many people. Click here to see the […]

The Challenge: Liam’s feet ached from the weight of his heavy steel toe boots as he pushed open the door to his house. He wiped the sweat from his lip and pulled at the stubborn buttons of his green jacket, struggling to kick off his boots at the same time. He thudded through the house […]

#SaturdaySerenade: Sex Songs – Deeper Into Me

The Challenge: Write a Sex Song Learn More… The following is reminiscent of like an 80’s pop hit. I have an idea for how I want it to sound so tonight I plan on screwing around on my piano with it for a bit. If I come up with anything, I’ll be sure to share, […]

TO DO: Spa Day Reward

I kinda suck at the whole “take care of yourself” thing. I don’t take care of my skin, my hair, my nails. I’ve told you before about my haircuts and how terrible I am with that. In my entire life, even through a six-week modeling course, I have never once plucked a single hair on […]

TO WRITE: A Collection of My Years of Blogging

I’ve had this idea of late. I’ve been blogging on and off since I was about 14. I’m 28 now, so you figure, that’s about 14 years of blogging – almost half my life! I say almost and about because I have always tended to take extended breaks from blogging. And there’s a lot of […]

For the first time ever, I am proud to say, I get to do a progress update post on My Bucket List!!! Aren’t you excited?!? I’ve never gotten to do one of these before, but I figure I probably should. So, what is a progress report? Well simply put, it’s an update on any progress […]

TO GET: A Guitar

It’s been a really long time since I last owned a guitar. I got my first guitar when I was about 13. It was actually a present for my brother but he wasn’t interested in learning electric guitar and I was, so I kinda perma-borrowed his guitar. I learnt most of my guitar knowledge from […]

Awhile back, I took the plunge and got myself some Japanese Silk Rope, which has been on my to-do list for a long long time. Finally getting it means that I can begin completing other rope-related goals. And I have been in rope heaven! The Boyfriend enthusiastically agreed to be my guinea pig and after […]

Going through old Facebook posts tonight, and ran across this awesomeness. Made me smile so big, so I thought I’d take a moment and share. Enjoy!

Two days ago on Instagram, I posted this picture: Today, we took this picture and drove away in our brand new-to-us (and my absolute dream car), a Grand Caravan. Couldn’t be happier!!

It’s been a lot of gaming around our house lately. The Boyfriend has recently gotten a bunch of new games including Neverwinter, Mortal Kombat X and State of Decay for the Xbox One, so it means that all he wants to do is play the games. I had awhile of working really hard on stuff […]

The Beginning of Spring 2015

So far, the Spring of 2015 is looking like it might just be one of the best Springs we’ve ever had. While the weather may not have been all that great coming into it, it’s started to warm up and we’ve had quite a few eventful days. My sister and her family came and visited. […]

I’ve said it a few times on The Rantings now, “The Older Three“. Whenever I say this, I’m referring to the older three kids – or as I often think of them, my first set of kids.

First, I say that because the gap between when each of the first three kids were born and when the fourth was born, seemed much much shorter. Also, because the three older ones have the same Dad and the fourth has a different one.

It’s only appropriate that I finally introduce you to The Older Three. We started with Kaeidyn, so it only makes sense to travel down the ages and go next to Kenzie. 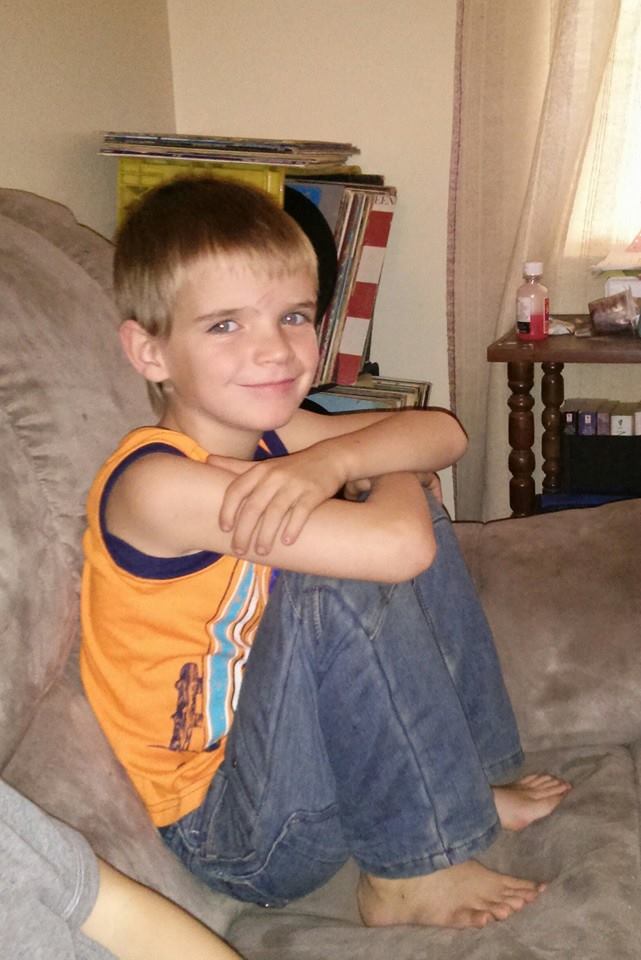 Kenzie was born sometime during a muggy day in late April. Pregnancy with him wasn’t nearly as bad as with Kaeidyn, but came with a few wollops of it’s own. That gallbladder issue I had before, flared up bad with Kenzie and I ended up in the emergency room many times because of it.

Due to the fact that it hadn’t been that long since I had had my c-section and because as my belly expanded, I often complained of pain in that area, we had originally planned to just do another c-section. However, on that final visit to schedule the c-section, it was discovered that I was already in active labor.

Dialated and effaced more than I had ever gotten to with Kaeidyn, we were scheduled to go up to the hospital the next morning. After a few hours, my water was broken and in no time, I was ready and willing to push.

Alfie and I had broken up before I had even known about the pregancy and my Mom was definitely my biggest supporter through the whole thing. She was with me on the day Kenzie was born, holding my hand as I whined that we should’ve just done another c-section.

I had been given a shot of fentanyl when the contractions had started getting intense and then through the whole pushing experience was fiercfully gripping the people standing beside me. By the time Kenzie finally came out, my arms were so exhausted that my Mom had to hold him on my chest for me.

He was an incredibly healthy baby and we got to go home shortly after he was born. For quite awhile after he was born, I was full of energy, always wanting to go for walks to show him off, and overall pretty darn happy.

Now, Kenzie is 8-years-old and he is nothing like he was when he was a baby. First and foremost, he is constantly on an emotional rollercoaster ride. One minute he’s happy as can be and the next minute, he’s in shambles. He flip-flops so often with his emotional state that we often sit and stare at him in utter confusion, unsure of how to respond at any given moment.

He’s quite a rambunctious child as well and finds it quite hard to sit still for long lengths of time, unless it’s to play video games. That, is just about his favorite thing in the whole world. All of my kids are huge gamers, but Kenzie really puts the rest of them to shame. And he’s kinda awesome at a lot of games and often can be found kicking The Boyfriend’s butt in Halo or Call of Duty.

He’s smart as heck and often surprises us with what he knows, especially where math is concerned. His teachers are often impressed with the interesting ways he comes up with to solve a problem and the fact that he’s so good at working with larger numbers. I’m always shocked when he takes two or three digit numbers and just adds them up with no pen or paper or anything!

In terms of toys, he’s a pretty hard guy to buy for. He really only wants games and if it doesn’t involve games, he’s often lost on what’s available. Sometimes he’ll play with cars or legos or whatever the other boys are playing with, but for the most part, he wants to be playing games or watching other people play games. And when it comes to Christmas or birthdays, you can almost be sure that he’s going to ask for a game.

They’re still all at their Dad’s, and I am officially starting to miss them. I keep arguing with myself about when I want them to come home. Next, we’ll do Keirnan…

One thought on “The Older Three – Kenzie”